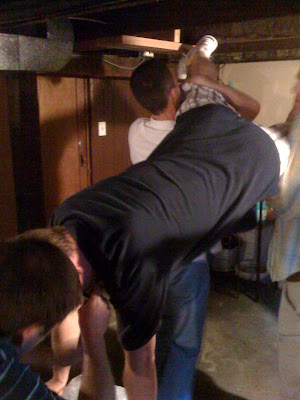 It wasn’t quite Chad Johnson versus the thoroughbred. Or Ruthie versus Coral. Or Mine That Bird versus Rachel Alexandra. But what went down Sunday at the BBQ in Seattle was something just as noteworthy. Just as thrilling. And totally tits.

It was an epic Memorial Day barbeque in Seattle. My wife and I made the short flight for the extended weekend. Jericho and his wife were also in town. It was like San Francisco-North but with more white people and less swagger.

The event on Sunday started at 2pm, but in frat guy time that means 4:30pm. On the menu was grilled Panini’s. We stayed at the house that was hosting so naturally we planned the guts of the party. (Let me tell you, I was the social chairman of my fraternity in college. What does this mean? Not a whole lot. Maybe it explains the massive weight gain my sophomore year. Or why I took a hussy to Spring Cruise Junior year. And Senior year. But it also means I’m good at picking music, planning drinks and gauging total food consumption. Here’s a tip; never underestimate the skinny bitch in the house. It might go down the toilet later, but she’ll give those Panini’s a run that would impress Prefontaine) We talked about grilling burgers. (predictable.) We talked about making pizzas. (amateur.) We even talked about roasting a pig. (um, what?) But ultimately we settled on Panini’s. On the grill. Which naturally makes them way more manly.

When you get a bunch of former frat dudes and a keg and a 3-day weekend and add some chicks and some funky tasting French onion dip…something’s bound to happen. Being the naturally charming one in the group, I pointed to Nez and told Joshy that I bet Nez could do 45 push-ups, no doubt. From there it escalated. We sized up Nez and his too tight Lacoste shirt and eventually the conversation got around to Tyler’s affinity for keg stands. Mix it all together and the match-up was on. Total number of push-ups for Nez versus total amount of seconds on a keg stand for Tyler. This was Celtics versus Bulls circa 2 weeks ago.

The rules were as follows; Nez would go first with the push-ups. He would do 1 complete push-up so everyone could agree that the form was correct and it counted. We even put a keg cup upside down and agreed that Nez had to touch his chest to the cup to make it count. Tyler would go next. One guy per leg, one guy pumping the keg at an agreed upon steady pace and the official counting would be done by Joshy’s cell phone. No, it wasn’t an iPhone. Joshy doesn’t understand such technology. I think it was a Samsung. Or one of those phones Ozzy Osbourne babbles on about. Joshy says the phone makes him feel ‘rock and roll.’ Damn it Joshy.

Joshy wanted odds. He thought that Nez could easily do more push-ups than Tyler could do seconds on a keg stand. So after much arguing we set the spread at 9. Nez needed to beat Tyler by 9 total. I put money down that Nez would win with the push-ups. It was on.

We retreated to the basement where the keg was being stored/coddled. Shit, we babied that thing for 2 straight days, rotating the ice packs, stroking its strong shell and singing AC/DC tunes in its ear. We closed the door behind us for two reasons;

1) Tyler’s wife does not allow him to do keg stands anymore. And with good cause.
2) Nez brought his new girlfriend to the party and he wanted to see how long he could fool her into thinking he wasn’t a complete meathead frat guy.

The intensity in that basement when the door slammed was off the charts. It felt a bit like Fight Club, a bit like a Michael Vick dog fight and a bit like a couple strippers were about to do a trick we’ve only seen on film. Jericho had a joke that brought the house down but believe it or not it’s too graphic to say…even on here.

Nez banged out 54 push-ups. I was so proud. I was figuring 45 and he nailed 54. Later he told me he squeezed out those last few because he knew I had cash on the table. Respect. Then came Tyler. Tyler was like Tyson before the opening bell. Or LeBron when his team is down 3-1 in a series. He didn’t even flinch. Tyler went a good 50 seconds before he even indicated a struggle. Later we checked his shirt and the ground and there was zero evidence of spillage. It was a performance for the ages.

Then we all returned to the party, enjoyed a Panini and faked civil conversations with the ladies.

Damn it I love my friends.

Paninis and man play (see sexy photo at top of post). What kind of fraternity was this? Was it paninis or penisinis?

I've been an avid reader of your blog for about three months and it is always hilarious and enjoying. This last post though is great and probably one of my favorite when it comes to storytelling. Keep up the fine work and knocking the box office predictions out of the park.