I Owe Him a Quarter 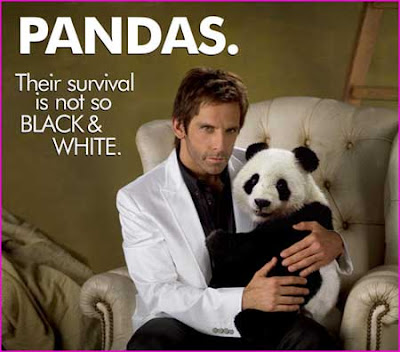 Look, Panda, I get paid in Panda babies for this, right?

(I’m including the Monday tallies as well)

- With Star Trek, Wolverine and Angels & Demons starting the summer season off, there’s been nothing out there for kids and families. Enter Night of The Museum 2, expect this movie to open big.

- Look, I like Stiller as much as the next guy, but I think it’s worth noting that this is his third sequel in five years (joining Meet the Parents 2 and Madagascar 2). With word that Meet the Parents 3 just went into production, it’s safe to say that he’s officially reached “hey, let’s make Indy 4” sell out status. (P.S. Stiller apparently already trademarked that term and I now owe him a quarter).

- Sometimes my judgment gets clouded by my opinion, and here’s my opinion about Terminator 4: who in the fucking fuck wants to this fucking pile of fuck? With that said, I feel in my heart that this movie will under perform, but it does have pretty good buzz heading into the weekend and is a franchise that always seems to open well. So it’s really anyone’s guess here. I’m going with $71 but wouldn’t be surprised to see this in the 80s.

- Star Trek continues to perform well, actually outselling Angels & Demons throughout this week. A weekend in the mid $30s puts this in the top 100 all time.

- Happy Memorial Day, everybody. Mags and I are both out tomorrow, so we'll get back at ya on Tuesday.

By the way, have you seen how big Magic Johnson is? Can you believe that guy was ever a guard in the NBA? He looks like a retired guard from the nfl.