Let’s All Win Our Oscar Pools 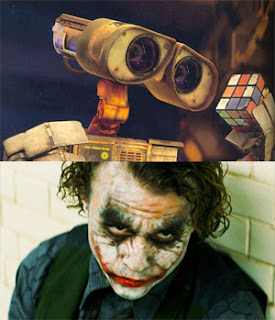 Sorry boys, the Academy fucked ya.

Best Picture
Will Win: Slumdog
Should Win: Milk (although it really should be The Dark Knight)

Best Director
Will Win: Danny Boyle
Should Win: Gus Van Sant (this is probably the best argument of the year with two complete contrasts in style. More on this below)

Best Actor
Will Win: Penn
Should Win: Penn (Not only is he just all around better than Rourke, but the Oscars don’t want Rourke up there)

Best Actress
Will Win: Winslet
Should Win: Winslet (You know what? Pound for pound, I really think Streep was better, but it’s Kate’s year and everyone knows it)

Best Supporting Actor
Will Win: Ledger
Should Win: Ledger (My Heath thoughts are best summed up here - it’s the best performance of the year by a landslide)

Best Supporting Actress
Will Win: Cruz
Should Win: Cruz (this is always the toughest category to predict and the nominees are extremely underwhelming this year. I think Cruz wins by default)

Best Original Screenplay
Will Win: Milk
Should Win: Wall-E (Milk is fantastic, but Wall-E was the most creative, most imaginative script of the year – don’t get fooled by the lack of dialogue. Guess what? The action scenes, scenery, sounds, look and feel of the characters, yeah, the writers do that too!)

Best Adapted Screenplay
Will Win: Slumdog
Should Win: Slumdog (three things I won’t argue so don’t even bother: Dark Knight is best movie of year, Ledger gave the best performance and Slumdog is the best screenplay. End of story)

A few thoughts:
*I think the Dark Knight will win the most Oscars of any film. It’s nominated for 8; I think it wins 6 or 7. Everyone in that room knows that it should be nominated for Best Picture; this will be the consolation. In other words, if you see Dark Knight on your ballot, check it.

*On the flip side of this, I think Benjamin Button gets crushed. Make up, art direction, costume, maybe editing – I’m thinking 3-4 tops. Pretty small number for a movie nominated 13 times.

*Possible upsets:
- Rourke and Penn canceling each other out, opening door for the well-liked Frank Langella
- Not really an upset per se, but Streep might inch past Winselt for Best Actress. Some might consider Kate's performance more of a supporting role and go with Meryl.
- Best supporting actress can always surprise, would not be surprised to see Amy Adams or Marisa Tomei take this one

*Okay, so let me be the 5 billionth person to ask this: why isn't Springsteen nomintated for best song for The Wrestler? It was crazy when Eddie Vedder get shunned last year, but there's only three songs nominated this year! They snubbed him on purpose! That's like getting shot down for a hand job by the response, "I'm sorry I don't have hands." I can see your hands, biatch!

*When Crash won Best Pic in 2005, it won a total of 3 Oscars - the lowest total number of Oscars ever for a best pic winner. There’s a very good chance Slumdog ties that record this year – it’s got three awards in the bag - Picture, Director and Screenplay – and has a very good shot at two more - Cinematography and Song – but only winning three is a very real possibility.

*I don’t buy the “redemption” angle that people are saying will push Rourke to an Oscar. A great analogy to this is 1994 when a well-respected industry veteran with one Oscar already (Hanks in Forrest Gump) was up against a once-respected has-been who rejuvenated his career with a risky role in a well-regarded indie film (Travolta in Pulp Fiction). The drum was beating for Travolta but ultimately the better performance and better actor came out on top. Honestly, the nomination is the reward for guys and stories like this. I think the Academy would be much happier with Penn as a two-time winner than Rourke as the comeback kid.

*More on the director race: I think this is less of a proficiency question and much more about personal preference (which I guess every category is ultimately). If you think about it, there are two types of well-directed films: the kind where you really notice the director and the ones you don’t notice him/her at all. You think of movies like Trainspotting where the camera is moving all over the place, quick cuts, random angles, the type of movie where you are aware of the director at all times. On the other side, you have movies like Good Will Hunting; quiet, still, the movie seems to float effortlessly from scene to scene. I mention those two movies b/c they are the flagship films for each of the two nominees in question and showcase their contrasting styles perfectly. I just happen to prefer the latter style b/c I think the frenetic, fast style can sometimes overpower the actual story, which happens in Slumdog one too many times for my liking. Again, just my preference, but I’m pulling for Van Sant and Milk to take this one home.

*I need to see a few more movies – Frost/Nixon, Grand Torino, Rachel Getting Married, etc – before I can give you my top ten, but from what I’ve seen so far, four of the five best movies this year aren’t nominated: Dark Knight, Wall-E, Doubt and Vicky Christina Barcelona.

*On that note, I’m less excited for the Oscars this year than I’ve been in a long, long time. You have to go back to 1998 to find a year with weaker all around films (Shakespeare in Love, Saving Private Ryan, Life is Beautiful, Elizabeth, The Thin Red Line – I really like the first two, but neither one is a Best Pic in my view. Also, much like this year, the best movie - The Truman Show - wasn’t even nominated). With all that said, of course I’m watching every second, winning every pool I enter and just loving all the excess that is Hollywood.

Welcome back Jericho. Your movie analysis is appreciated and always on point.

Who's going to win best animated film? I need help on my office pool please.

Best animated film? Christ, man, haven't I sucked off Wall-E enough by now? Do you really think I'm going to spend 1,000 words bemoaning the fact that Wall-E isn't nominated for best pic and then give the animation Oscar to Kung Fu Fucking Panda!?

Buddy - Have you seen The Reader? FUCKING TERRIBLE!

Truly. Worst best picture nominee I've ever seen. If you like want to watch a nazi pedophile undergo a completely underwhelming non-redemption in a dull-ass movie, see The Reader.

There were nazi's in The Reader? All I saw was Kate Winslett's body with some blah, blah, blah in between.

You got them all right, Jericho. Nicely played.