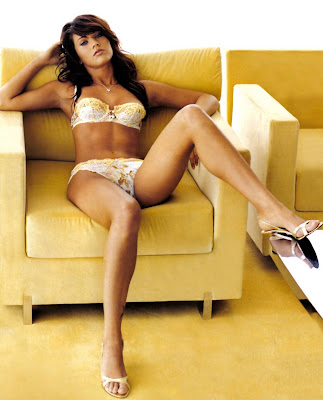 
Apple
Jericho has been at jury duty the past few days. It's killing me. It means I actually have to do work while I'm at work. He updated me on where things stand with the trial. He said they've started jury deliberations and its come down to 11 saying guilty vs. 1 not guilty. And they need a unanimous decision. (remember OJ?) Unfortunately the 1 voting against the group is a 95-year-old Chinese woman. If there's one thing we've learned while living in San Francisco it's that old Chinese woman are the strongest human beings on the planet. Physically, emotionally, mentally. Forget Barry Bonds, forget Chuck Norris, forget David Blaine or that drag queen who's dating Hugh Hefner's ex chick…I'd take the 95-year-old Chinese woman any day. I guess it'll be some time before Jericho resurfaces.

Moustache
So, Tiger has a daughter named Sam Alexis and a son named Charlie Axel. By doing a few calculations here I'm fairly sure his next kid will either be Joe Ax or Chris X. It's like he's raising an androgynous white trash army over there. Or a bunch of WWE wrestlers.

Apple
At the start of the playoffs the odds for Arizona to win the Super Bowl was set at +5000 meaning if you put down $100 you get $5000 in return. That was at the start of the playoffs. The odds as they stand today puts the Bills, the Texans and the Redskins at +4000 to win the 2010 Super Bowl. What?! How does this make sense? That means 'they' (the sneaky collective sitting behind glass walls and smoking out of corn cob pipes in Vegas) figure the Bills, Texans and Skins have more of a chance to win it all in 2010 then the Cardinals did when the playoffs started this year. That makes no sense. Do they think we're not paying attention? I'm starting a petition. Or burning some bras or something. Who's coming with me?


Moustache
Like everyone else who watched the A-Roid confession on SportsCenter, I was struck by the three following things 1) That sweater? Really? It's one thing to confess to steroid use on national TV, it's another to do it in periwinkle. 2) We all know that steroids make your head bigger, but who knew they made it shinier? He looks like Dora the Explorer's gay brother. 3) Have you ever seen a pair of pinker, plumper lips in your life? Cheater or not I'd totally mouth fuck him.

Email ThisBlogThis!Share to TwitterShare to FacebookShare to Pinterest
Labels: countdown to FWG

You are right on about the Chinese.

"China is here? I don't even know what the hell that means!"