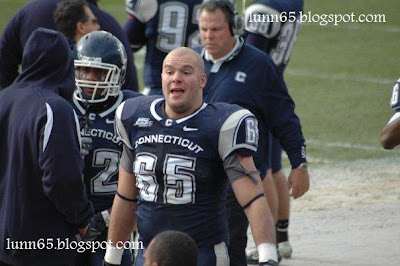 Despite our fake names that make us sound like Latin Chippendale dancers, we are actually just fat white guys. Yep, the secret is out of the bag. So, it is with great pleasure that we share our silly little blog space today with the one and only Fat White Guy or FWG if you're into the whole brevity thing. FWG is a plus sized dude who played D-Line for the UConn Huskies and writes one of the better blogs out there. He provides a unique look at college football from an insider's perspective. He also can eat 3 foot-long Italian BMT's at Subway in one sitting.* He's heading to Austria soon to drink beer, chase foreign women and continue playing football. Ladies and gentlemen, introducing on A&M for the very first time, the Fat White Guy, Rob Lunn.

*FWG has not yet confirmed this. But we're willing to put money on it. All the fixings, including onions and jalapenos, no double meat, light on the spicy mustard. Over/under is 38 minutes. Who wants in on this?


******
Allow me to introduce myself. My name is FWG or the Fat White Guy. I played 4 years of college football at the University of Connecticut. 47 consecutive games with 22 starts. I know college football. I have my own blog, THOUGHTS FROM A FAT WHITE GUY in which I break down the world of sports, mostly college football, NFL, and MLB, and also my incredibly hot girlfriend (see below).

But also anything that strikes my fancy, including featured segments like "This Week's Sign of the Apocalpse" and "Your Fat White Guy Moment Of The Week". But here I am, blogging for Apples and Moustaches.

The answer was a resounding (and in unison), "No." (Not that there's anything wrong with that). The quick denial means that this topic may still be up for debate. Which brings me to today's guest post.

First I don’t know why this is such a huge surprise to everyone. Were you thrown off by his chiseled jaw and Latino swagger? Well apparently that jaw was cut from HGH and not his south of the border genetics. Was he the poster child for all that was good and pure with the sport? I certainly hope not. He’s a New York Yankee for Christ’s sake. It should no longer surprise the American public that athletes are juicing, especially the ones we think are "clean." In the land where bigger is better, and it’s only 40 more cents to "super size it" all of a sudden we want our sports to be free of this self imposed gluttonous madness. I say Juice-on A-Rod! In fact, pass some to your boy (and hetero-life mate) Jeter. A professional athlete’s career is only so long, so call it "maximizing your earning potential." For example, the average career of an NFL Linemen is only 2.5 years. 3 years gets you a pension, and league minimum is under $400,000. If shooting some synthetic testosterone helps these guys make a few extra bucks, or prolongs a career instead of leaving them broke and pension less, then I am all for it.

I'm not saying the next step is passing out syringes to our little leaguers, but we are talking about professionals here. Let them make as much money as possible, by being the very best, in their decidedly short careers. I wouldn't deny a doctor a new tool or medicine that would help him to perform his duty the best. So why are we denying these so called "performance enhancing drugs?" Educate them on the risks, and then turn them free on an endless stream of Winstrol, cream and clear, HGH and whatever else strikes their fancy.

Cause when its over, its over. Take it from someone who knows.

Um-who are those girls and why aren’t they wearing bikinis or lingerie? TAKE IT OFF FOR A + M for Christ's sake.

Would you say the same thing if you knew college was the highest level he wouldve reached?

which one is FWG's girlfriend? Who am I kidding, they're all 3 hot.

I bet the fat guy can't eat the sandwiches.