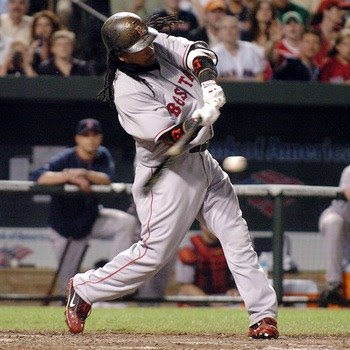 I don’t normally do things like this. Write letters to strange men trying to coerce them to come to town. No, this is not normal for me. But you are different. You with your strong bat and ice cold veins. You are something special. So allow me to dream for a minute will you Manny? Just this once.

Let’s cut the bullshit Manny. We need you and you need us. We are desperate for a bat. Something to jump-start our offense. And let’s face it you are a winner. When you went to Boston you put the team on your back and willed them to win a World Series title. Hell, you did it twice. In LA last season, you took a completely worthless bunch of slap dicks and advanced them to the NLCS. Well, Manny, you’re the missing link for our little ball club here in San Francisco.

Seriously, what are your concerns? The weather? It’s always 65 with a touch of fog. The gays? They’re like the nerdy kid in high school that you decided to become friends with and then realized had a pool table at their house. Chinatown? Me too. But just avoid that area and you’ll be fine.

Look Manny the last time I wrote this adoring of a letter to another man my wife almost left me and Posh alerted the authorities. But my motives are sincere. All I want is to be dancing in the streets come October. Please, consider San Francisco. And bring Pedro’s creepy little midget too if you want. We’re waiting with open arms.


With hope and little dash of lunacy,
Magglio

Email ThisBlogThis!Share to TwitterShare to FacebookShare to Pinterest
Labels: i have witticisms, so long mister moose

Great call on the midget. He would fit in perfect in S.F. and could even be the equivalent of the rally monkey for the Angels.

Your ability to make me genuinely give a fuck about where Manny Ramirez ends up is proof of a true rhetorical gift. Be sure to use your power for good instead of evil.

Next up: convince Kelly Clarkson and Justin Timberlake to perform a duet at my birthday party. I'm thinking something straight out of From Justin to Kelly, but we'll replace that low-budget bitch Justin Guarini with the real thing. I'm going to go to Hot Topic and start working on costumes.