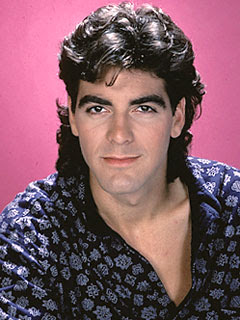 Apple
A recent headline:
George Clooney has offered to act as a mediator between the Writers Guild of America (WGA) union members and Hollywood bosses in a bid to end the strikes.

I mean, is there anything that Clooney can’t do? Did you know that his stubble cures cancer and his pee tastes like friendship?

Moustache
Politics:
Not our normal forte obviously, we specialize in balls, boobs and booze here at A&M, but if you’ll allow me to climb on a tall horse for a second…look, there are three really good Democratic candidates this year, all smart, well-spoken, driven and likable, all three seem to genuinely care and I truly believe that either of them would make a good President. I’ve watched the debates, read the materials from their Web sites and honestly, I can’t tell any of them apart. They all have the same goals, ending the war, improving healthcare, increasing the standing and perception of the US around the world – but they take different roads to get there and bicker constantly about the specifics. I have three thoughts on this:

1) Vote for the candidate that you connect with the most on a personal level; you have to trust that whoever the Dems put forward is going to have a strong agenda, your job is to pick the person that you’ll want to look at and listen to for the next 4 years

2) The general feeling of apathy that has permeated our country the last 5-6 years is fucking staggering. Bush has made us feel hopeless, uninspired, lost, that more than anything needs to change this election

3) Vote. Honestly, vote Republican. Vote for a horse. It doesn’t matter. Our generation votes at historically low levels, let’s change this (p.s. if you vote for a Republican or a horse don’t ever fucking read this page again – my diplomacy only goes so far you red neck fuck)

1) I really hope Holmgren stays, there’s such a good foundation, we’re 2-3 players away from being a contender, but more than that, this team is built on his system, if he leaves and we can’t find a West Coast guy to replace him we’ll take a major step back

2) Sign Trufant and let DJ Hackett, Josh Brown and Locklear walk. Cut Marcus Pollard. Try and get Burleson and Alexander to take pay cuts. Hope that Chris Gray retires if not cut him. Sign an OG but not Alan Faneca; he’s too old and too expensive. Give Alexander one more year; if he falters again cut him next winter.

3) We need to use the draft to get a RB, a TE and to start rebuilding the offensive line. If Trufant leaves then DB will also jump to the top of the list. If for some crazy reason Jonathan Stewart, Fred Davis or Jeff Otah were there for us at 25, I’d jump up and down and grab my crotch thunderously.

1) Best picture is a two horse race between No Country and Atonement, and it looks like Sweeney Todd will eclipse Juno in the “no, we don’t only nominate stuffy dramas” best pic nom

2) Best actress and best actor seem to be all but decided, Julie Christie and Daniel Day-Lewis look pretty unchallenged at this point

3) The Globes are a very overrated Oscar predictor, pay attention to what the SGA and DGA do, those have much better track records

Apple
The current state of indie bands:
Thank God for The National, Kings of Leon, Band of Horses, Iron & Wine and LCD Soundsystem – in other words, I’d like to officially welcome back beards, booze and beer guts to the indie rock scene. Thank Fucking Christ. The skinny, black jeans, coked-up guyliner shit had to fucking go and let’s hope it stays dead forever, welcome back flannel shirts, boots and Mr. Jack Daniels.
Posted by Casey Lewis at 12:02 PM

Email ThisBlogThis!Share to TwitterShare to FacebookShare to Pinterest
Labels: A and M, movies, music, politics

Sean Alexander needs to go. He is horrible and has lost all motivation to play football.

Johnathan Stewart would be an excellent pickup. He was a stud @ Oregon and he would feel right at home in Seattle.

Hilary wins and I move to Canada. Oh Can a da!

I see from your profile that you are a 28 year old San Franciscan. It is wholly unremarkable that you feel 3 democrats(all of whom would make horrible presidents) would suffice. You talk about voter apathy, but do you really want people 2 and more std dev from the IQ mean deciding things? I think less voter participation is the answer. There should be some knowledge based hurdle to punch a ballot. If you actually knew any real americans, not the garden variety SF lib, you would know people are pissed because the president has not been conservative enough. You need to age a few more years, own a home and have some children. Stick to the funny Clooney posts, that is your comfort zone. Red necks are the backbone of this great country.

WOW! You guys have real red necks that read your post? I thought they were all dead by now....

Remember Hillary is really the candidate of experience because she slept (undoubtedly alone) at the White House for 8 years. Seriously, that is the experience she touts.