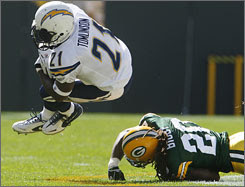 1.
One of the truths of football at any level is that the QB gets all the credit when you win and all the blame when you lose. That’s just the way it is and how it always will be. So, I’m ready for all the “The Maturation of Eli” and “From Sibling to Super Bowl” and “From Vag to Super Swagger” and so on and so forth. However, as we’re jerking him off let’s remember three things: 1) The Defense, which gave up 70 points in the first two weeks, has come together and is playing outstanding football. We always knew the pass rush was good, but the second and third levels, particularly the corners, Madison and Ross are playing out of their heads. 2) The Offensive line, long one of the weaknesses of the team is road grading people, Eli has more time and is making better decisions, let’s give the line some credit for this. 3) Brandon Jacobs and Bradshaw are the perfect 1-2 punch. Jacobs, despite some momentary lapses when he runs too tall, has been unstoppable and Bradshaw has the quicks to cut back when defenses over pursue (which the fast GB linebackers did on almost every single play). I don’t know how any of these three will translate to the Bowl, but they are stories we need to remember during the “pull out and come on my tits” Eli stories we’re going to get overwhelmed with over the next 13 days.

2.
Giants Defensive Coordinator Steve Spagnuolo will be a head coach somewhere next year. He’s transformed a very good unit into an elite unit and has the look, feel and goatee of a head coach. How much would Washington love to nab him from the Giants next year?

3.
Mike McCarthy’s play calling in the second half was atrocious. Why was every run an off tackle and why was every pass play 10-15 yards down the field? That’s the exact opposite approach of what got them here and what Brett’s strengths are. Where’s the slant? Where’s the draw and screen pass? Why not stand up and throw it immediately to Jennings, see if he can make a couple of guys miss? Why not run the stretch play and tire out the Giants’ DEs? Where’s Donald Lee up the seams? That baffled me more than anything yesterday. Brett didn’t throw the ball very well, their LBs over pursued, Plaxico got to fuck Al Harris without even taking him out to dinner or anything, but McCarthy got out coached yesterday.

4.
5 quick hits:
- I think Favre comes back for one more year. He doesn’t want the last pass he threw to be a horrible pick that cost his team the NFC championship.
- Atari Bibgy needs to be mentioned in the “hardest hitters in the NFL” debate, that guy is a fucking assassin out there.
- What were Terry, Howie and Jimmy trying to prove with those hats? We get it, you’re all rich, white dickheads. We knew that all ready, you don’t have to scream it. They were one Barry Manilow song, one Bingo game and one “sending back the soup because it’s too hot and too tomatoey” away from having an old white man power rally.
- How great was Eli’s celebration? You could almost hear his thought process as he was looking for someone to hug, “white person, white person, white person, white person, white person, white person, there’s Jeff Feagles! Hug me Feagles! I love you, I love you, I love you.”
- How weird and uncomfortable was Archie Manning’s box yesterday. Can’t you see him just screaming at people the whole game? “Gall darn it, Robbie, sit your buns down! You know Eli hates when we high-five after a first down and I’ll be a toasted bagel in a synagogue before I let my son see you slapping skin after another first and ten!”
Posted by Casey Lewis at 8:27 AM

Did you also see how uncomfortable it was watching Eli Manning look for his girlfriend after the game. He looked like a lost child looking for his parents at Disneyland.