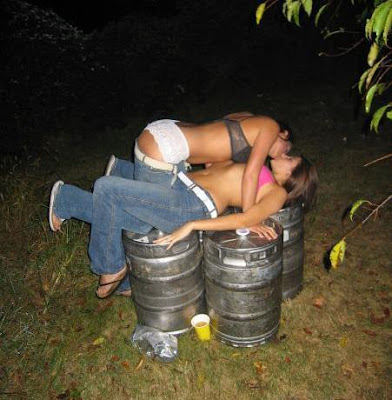 Since we've been out we've received a slew of emails from concerned readers. Some were just checking in, some sent topless photos trying to entice us to keep writing (thanks Kendall) and one promised a vial filled with tears to prove the pain we've caused (suck it up KK!).

We decided to field a few….here they are:

Hey guys, how was the man date?

Fantastic. Better than advertised. Over the top fun. Our waiter was a big fat guy who liked fantasy football. Sitting next to us was a grown man and his parents who decided this particular steakhouse would be the place to tell them that he loves cock and his roommate 'Chris' was actually his slam piece. You could cut the tension with a knife. It was an ideal situation. The steaks were massive. The drinks were stiff. And no, I didn't whip my balls out. Jericho pulled out a joint as we exited the dinner and we even invited an innocent bystander to join us. It truly was the season of giving. (Important to note, he used Randys…for those of you that dance, Randys is like sucking on some tits while they're propped up in a push-up bra. Its fun either way, but the push-up just adds an exciting convenience factor. Am I wrong?)

My wife made an incredible cameo late night and led us to a crowded bar with a gigantic Bigfoot standing in the middle of the room. We stumbled into a booth and slammed cheap beer while bad indie rock blasted in our ears. It couldn't have gone any better.

First time writer, long time reader…Did either of you make the Fantasy playoffs?

Yes. I did. And I'm playing in the championship game this weekend. Once Jericho was eliminated I immediately hired him as the Director of Psycho Analytics, a very important position on my staff. You see, when we get this close, I like to flip the fuck out. I make dumb decisions. I worry like I was Danny Pintauro looking for work during this economic downturn. Jericho is there to calm me down. So, yes. We're playing for all the marbles this weekend. 1-0. That's my only focus. Just one game. Hold the baby, kiss the baby. Hold the baby, kiss the baby.

Hi Magglio – I think you're so sexy. Why didn't your phone work the past few days?

Funny story actually. Stay with me on this one. I got a quick phone call from the wife on Monday afternoon. Truth be told she was the only one talking. It went something like this: "Stop using your phone. We're switching plans. I'm getting an iPhone. You can't get one. Stop using your phone." Click. That was it. So, yes, I got a new phone. No, it's NOT an iPhone. In the end it was the right call. If you've been following along I've broke about 3 phones in the last 6 weeks and there is no insurance on an iPhone. So this time I picked the phone that was red and white just like The White Stripes. It's slow and clunky but it screams Jack White. And everytime it rings I go from 6 to 12.

Um, I have a problem. I love dudes but I have a small mouth. What should I do?

Well TahoeSanta, that sounds like its genetic. So you could either a) start sucking on softballs to loosen up those baby makers or b) stop sucking dick!

Email ThisBlogThis!Share to TwitterShare to FacebookShare to Pinterest
Labels: mailbag