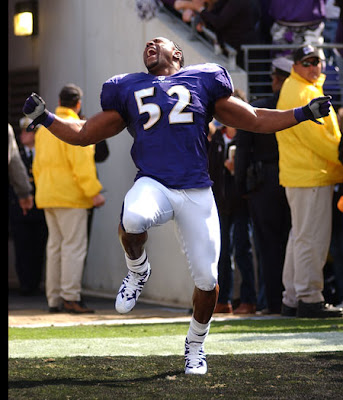 1.
If we ever win an academy award we will have to include Ray Lewis in our acceptance speech. First and foremost for the after party he’d surely throw for us. And secondly, there’s a chance he’d kill us if we didn’t mention him in our speech. In fact, we owe everything to Ray Ray.

2.
I watched every second of the Nadal / Federer match yesterday. Fucking outstanding. I'll leave the analysis for the bald guys in the bad suits (did we ever figure out what species Bud Collins comes from?), but I will say this, I was rooting for Federer for the entire match - then halfway through the fourth set realized that Gwen Stefani and Gavin Rossdale were sitting in Federer's booth and quickly switched to Nadal.

3.
Sales of watches must be plummeting. Who needs a watch anymore when you carry a cell phone 24 hours a day? I haven’t seriously owned a watch for the past 8 years. Casually? Of course. But not seriously.

4.
Let's leave politics, age and what not out of the debate for a second - there's no way McCain can win b/c America is not ready for a candidate that whistles through his teeth when he pronounces the letter "s" - we may be ready for a black guy, but we're no where near ready for a guy who talks like the fucking beaver from Lady and the Tramp.

5.
Would you rather never read another story about Brett Favre again or never have to see another picture of Heidi and Spencer from The Hills? Kinda a toss up at this point which is mind boggling. When did Favre reach “just die already” status? Oh how the mighty have fallen.

6.
You gotta like that A Rod opted out of a 225 million dollar contract in order to sign a 275 million dollar contract in the same year that he opted out of the marriage to his average looking wife to Kabbalah-bang Madonna in a hotel room. Nothing is sacred at this point. He might trade Jeter for Clooney, his Rolex for an enormous Flavor Flav clock, he might even figure out how to switch his head with Beckham’s. Can someone please make a video of A Rod upgrading his possessions as the Beyonce song “let me let me upgrade you, upgrade you” song from the direct TV commercial plays over top?

7.
I kinda dig Keira Knightley; she’s really attractive in a strange, abstract way, like a Picasso painting or something. However, ultimately, I feel like fucking her would be kind of like ordering a salad at a steakhouse. It’s a great salad, fresh, crunchy, and the first few bites are a fucking killer. But then you keep eating, and it’s getting blander and blander and you’re thinking, “Man, I fucked this up. I could have had a massive filet but now I’m stuck with these endives.”

Email ThisBlogThis!Share to TwitterShare to FacebookShare to Pinterest
Labels: if you dont think this is funny blame kk he prescreened all of these

I'd definitely read another Favre story then have to see a picture of that retard, Spencer. At least Favre was great at one point in his life.

Bring on the pictures of Heidi!!

Yo Magglio, where is Jericho with his flawless weekend Box Office Predictions? We have some betting going amongst ourselves and want to see where he hits.

see what happens? i go away for a few days and jericho curls up with his blankey and gets writers block. We'll snap this back into place.

hey hey. um yeah, having sex with knightly would be rubbish. total rubbish.

i have a fun product review/giveaway opportunity that you might be interested in. i know you don't really do gadget reviews, but it may be a good time! AIM me for the deets :) deelowinla

Knightly a salad?! no way man. You're crazy! Hey- i've got a giveaway thing i wanted to pass your way. email me if that's cool.