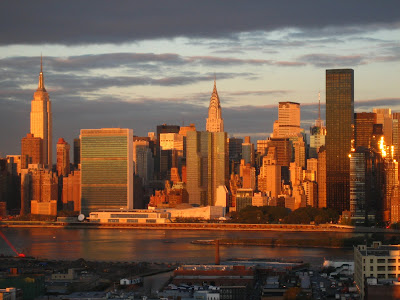 It’s 7:38am east coast time. That makes it roughly 4 o’clock and some change on the west coast. I’m sitting in a coffee shop in pounding a double soy latte. I took the red eye last night/this morning, leaving my place at 9pm, taking off at 11:30pm and somehow winding up here a few hours later. You see, I flew JetBlue. Which is a great airline but also a distracting airline when you need to sleep. I spent the 6 hours in air watching endless All-Star Game recaps, I Love Money on VH1, ESPN Classic which had USC vs. Illinois in the Rose Bowl game and Michigan vs. Ohio State when they were #1 vs. #2 earlier this year. I also snuck in some Animal Planet, some Deadliest Catch, some MTV’s Next and of course the channel that has a little graphic of an airplane that shows you where you’re flying over, how high you’re flying and at what speed. and breezed by and in no time we were passing over . seemed to take the longest to cover for some reason. Then I got entrenched in the USC/Illionis game and soon we were approaching .

Damn, this coffee could be stronger.

I figure I got about 20-30 minutes of sleep on the flight. The lady next to me, who looked exactly like Rick Steves, kept rubbing her arm against mine as she slept with her mouth wide open. I wanted to dump a package of Splenda in her mouth. I was jealous she was able to sleep and tired of her stupid “safari” vest. We get it. You travel. It doesn’t mean you have to dress like an asshole.

Nobody I know is awake yet. I can’t call or my wife cause they’re sleeping. (hopefully not together.) And I haven’t taught Patch to text yet so that’s no use. Let me start with this. It’s hot here. No really, it’s balls hot. When we landed it was 71 degrees….and that was at 6:30am. The forecast calls for hot and humid. Sweet. And it seems as though anyone and everyone is sucking off the Yankees. Which is cool I guess. I mean, I get it, the stadium is old and there were a lot of memorable events there. But if I hear about Don Larsen’s perfect game or the Subway Series one more time I might lose it.

If only I had more caffeine in my bloodstream.

So for now I’ll just wait. Wait for my hotel room to be ready. Wait to take a shower and a power nap (fingers crossed.) Wait to get a fucking wireless connection so I can post this delightful little post. And wait until I have a proper sleep before I start judging this city and this neighborhood. Hell, I’m here through Sunday. There’s a whole lot of city left to play with.

Get some nice pictures of Yankee Stadium while you're there. I know it's the Yankees, but Alex and I haven't seen it in real life. Your awesome (because I know they will be) pictures are going to have to do.

The east coast in the summer always kind of sucks. It gets super humid and hot and gross. If you get a chance, try to head a little bit upstate. It cools off pretty nicely.