Now I can die in peace 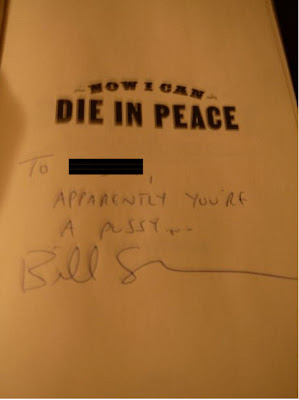 A picture is worth a thousand words. But I’d like to explain how this remarkable piece of sunshine came to be. You see, Jericho and I are both big fans of Bill Simmons, the Sports Guy. He truly is the best at what he does even though he sucks off Boston at any and every chance he gets. We can over look that, for the most part. So a couple years back when he came out with his first book, “Now I can die in Peace,” Simmons went on a book signing tour which stopped at major cities along the way. Including lovely San Francisco.

Now, I never had any intention of reading his book purely because it’s about how beautiful Jason Varitek’s penis is or something like that. But, I thought it would be fun to shake the man’s hand and truth be told I was still pissed about not being chosen as his intern a while back (remember that?) So I wanted to confront him face-to-face and resubmit my application. Can you blame me?

Jericho and I decided to meet at the bookstore on the day of the appearance. It was after work on a weekday. Jericho had been planning his outfit for weeks in advance. I looked amazing, per usual. Lo and behold I get there, and there’s no sign of Jericho. I wait and wait and wait and at this point the line is getting pretty long. So I buy the book (you have to buy the book to meet him, capitalist fuck) and wait.

I get a text from Jericho. It reads: “Sorry buddy, got caught at work, can’t make it.”

At this point I’m irate. I’m standing alongside all these overweight, hairy, Boston d-bags who are quoting Good Will Hunting and talking about the time they puked in O’Neill’s bar down on Third Street. It’s similar to being in Chinatown where you can’t understand anything anyone is saying. But substitute strong willed Asians with dumb looking Bostonians.

So it’s my turn to meet the Sports Guy. He’s smaller and has more gray hair then I expected. I shake his hand, tell him I think Kevin McHale looks like a drag queen from the mid-80s, and hand him my intern writing submission. I muttered something about “you must’ve not gotten it” or something like that. He politely took the piece of paper and said he’d read it later. Or he’d use it dispose of his gum later. One of the two, I forgot.

Then he says “Who should I make it out to?”

“Can you make it out to Jericho?”

“And can you be sure to mention what a fucking pussy he is.”

Somewhat stunned, he grabbed his sharpie and wrote what you see above. Brilliant. I then tried to touch him some more and that’s when security grabbed me and told me it was time to go. I managed to touch the top of his head and knock over a chair before being pummeled. My last memory was a look of shock and horror on Bill Simmons’ face.

Overall I was thrilled with the moment. I never told Jericho about what I had the Sports Guy write. A few weeks later I wrapped up the book and surprised Jericho. The payoff when he read the inscription was priceless. And now I post it for us all to enjoy. I never did read that book. But Jericho did. He said it was a fictional tale of a boy who wanted nothing more than to be on the tail end of a gang bang with Carton Fisk, Bill Russell and Tedy Brushchi. I never asked Jericho what happens in the end. Hmm, I wonder.


Thanks to TahoeSanta for the photo.

You fucker... Corey and I waited with you for 45 minutes on line because you looked scared of all the grown men in line who still lived with their moms. And, no fucking recognition of this. None. I even helped hold back the Sports Guy's assistant when she tried to jump in and stop him from writing about how pusstastic Jericho is in your book...

Did I mention, lil Joshy and Corey waited with me in line for 45 minutes? I think they even took photos of the event. Post them and die.

Tell your wife any more stories about Tahoe and I will fucking kill you.

P.S. I should have used a wide angle lens. It would have served as perfect metaphor for how big Jericho's Va JJ is.

We did take pictures! Fortunately, the Sports Guy would not agree to give you a handy in the Borders bathroom -- you would've needed to be wearing a Patriots jersey for that to happen. Do you remember his assistant was hot?

Tahoe - I have caught a HUGE amount of shit for all that, and I truly am sorry. Not my best moment, but also no harm intended, of course.

We did take pictures! Fortunately, the Sports Guy would not agree to give you a handy in the Borders bathroom -- you would've needed to be wearing a Patriots jersey for that to happen. Do you remember his assistant was hot?

Tahoe - I have caught a HUGE amount of shit for all that, and I truly am sorry. Not my best moment, but also no harm intended, of course.

I love you lil j.