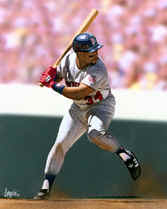 DONT TELL YOUR GIRLFRIEND SHE REMINDS YOU OF KIRBY PUCKETT.

Sure, it seems simple enough. Don't compare your chick to a short, round faced, pudgy, scooting centerfielder. Right? But let's examine the facts for a second.

Kirby Puckett was the premier centerfielder of the late 80's and early 90's. He was the undeniable leader of the Twins on and off the field, in 1986 he hit 31 homers along with 96 RBI's and a .328 batting average, and he single handedly won the World Series for the Minnesota Twins? Now ask yourself...does that sound like a compliment to be called Kirby Puckett?

To be compared to Kirby Puckett means to be called a leader. A visionary. An athlete. An inspiration. Now being compared to Adam Keefe, that's a whole other thing.