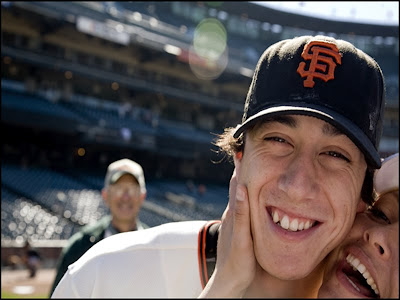 
One –
Tim Lincecum is a gift from God and I am thankful daily that he is a part of our team. And I'm thankful I have the opportunity to watch him play every 5 days. If you missed his last start, the complete game with 15 strikeouts, then I’m sorry. Life is passing you by. Figure it out for once in your life.


Two –
The trade today, Tim Alderson for Freddy Sanchez, ruffled a lot of feathers in these parts. Nobody likes to part with a 22-year old prospect with more hype than a Krispy Kreme donut. But that’s all he is at this point…hype. I think common sense tells you that any time you can get an everyday all-star for a prospect who is still a few years away, then you pull the trigger. I’m on board. All this talk about Brian Sabean making a move to save his job is half true. If he didn’t make a move the lunatic fringe woulda lynched his ass. But this move wasn’t desperate. This was calculated. Now sit back and let the Freddy Sanchez era begin.


Three –
We also traded for first baseman Ryan Garko. One of the weirder names in all of baseball. The new joke in my circle (yes, I have a circle) is responding to "Garko" with "Polo." Get it? It’s my new obsession. I want to figure a way to get the entire stadium to chant "Garko...Polo" whenever he’s at bat.


Four –
The Giants are 2-3 years from winning the whole fucking thing. Quote me on that. Print this out, gild it, frame it, fuck it, whatever you want. But mark my words. In 2-3 years, come October, I’m dancing in the streets pouring champagne on myself like I just won Rock of Love.


Five –
Happy Birthday to my little brother Scrotum, Scrotizmo, Scrontanamero, or Scrot...if you're into the whole brevity thing. Not only are you the coolest mother fucker on the planet but you're also the BIGGEST Giants fan I’ve ever met. I love ya kid. And I miss you. Go Giants!

Email ThisBlogThis!Share to TwitterShare to FacebookShare to Pinterest
Labels: didnt even mention cain and his 12-2 record not to mention the 9 innings of 3 hit shutout ball he pitched tonight

I am very happy with the trade, even if Alderson ends up being the next Timmy. You are right that prospects are just prospects. The road to oblivion in professional sports is paved with prospects too numerous to list. No one knows until you get to the big show who can do it and who can't. Look at Timmy. He looks like one of the skateboarding dorks in my office parking lot. People had issues with him over the years because he didn't fit their classic mold. I love that part about him the best.

For those of you who haven't met Magglio in the flesh, that is actually his hand and mouth framing Timmy Lincecum in that photo.

Magglio carefully protects his identity, so cherish that hand and mouth blogosphere.

I know Timmy probably did. Or at least was presented with the option.