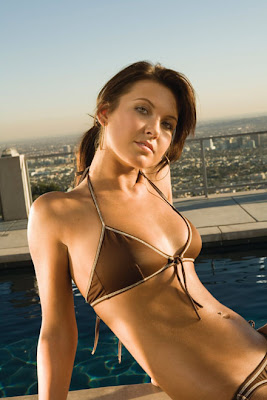 
Apple
While we’re on the subject of movies to avoid, here’s another one: Bottom Dweller: The Final Voyage. Like the rest of you, sometimes I just want to see a six-foot Russian girl with fake tits get nailed on a sandy beach. Who doesn’t, right? Well, Bottom Dweller: The Final Voyage offers plenty of that, except with one notable exception: no money shots. WTF? It seemed strange at first, but as the movie cruised along and the sandy beach became the jeep parked on a hill, which became the hot tub on the balcony, which became the kitchen (side note: porn scenes that start in a kitchen always have the best dialogue. That’s not even an opinion), it started to get offensive. What are they trying to prove here? Don’t tell me they’re trying to edit out the nasty stuff; the tattooed guy nailing the chick while her head was in a mailbox didn’t leave much to the fucking imagination (no pun intended). This is like watching a replay of a football game with all the touchdowns edited out. Can you imagine the uproar from the fantasy football community? Well, I wanted to see if the blond chick with the quadruple Hs took one to the face, I have her in my fantasy fuckball league. I feel cheated. So trust me here, friends, get your six-foot Russian fix somewhere other than Bottom Dweller: The Final Voyage.


Moustache
I’ve never given the group Sigur Ros a chance since their name constantly makes me think of Sugar Ray. Not the former boxing champ but the candy corn band with the dooshbag lead singer who is now a star fucker on Inside Edition.


Apple
Hurry! A great deal on portraits of dragons having sex with cars. Click here. (Thanks Monica)


Moustache
A few thoughts on 71 yr old, Oscar-winning songwriter Joseph Brooks, being charged with sexually assaulting 11 women. The lead paragraph says “indicted on charges of sexually assaulting women whom he would fly in to New York under the impression they were auditioning for movie roles.” I read that and I think, “Hey they got a free flight out of the deal, not a total loss. Maybe they saw a show or got a milkshake at that place in Serendipity.” While we’re on the subject of fucking a 71 yr old man for a free flight, sign me up. As long as he had his Oscar in my peripheral vision.