The Cardinals would be cool if they weren't so gay 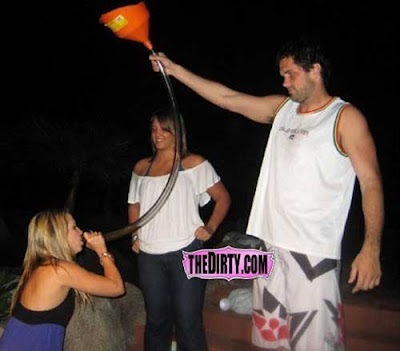 On Wednesday night the over under of the Cowboys/Cardinals game was 50 points. By the time I was packing my luggage for Phoenix it was 51. When I landed and got to my hotel room in beautiful Glendale, Arizona the over/under had raised to 52.5. Obviously people were expecting a shootout. So, what do I do? I take the over, naturally.

I attended the Cardinals/Cowboys game at beautiful University of Phoenix stadium today. Three quick observations about the pre-game festivities:

*I didn’t catch a single whiff of pot. I was at the tailgate at 10am, 3 hours before kickoff, and not once did I catch a scent of that real sticky-icky….ooh weee! If this was a Niners game, or a Raiders game, the smell of Marijuana would be prevalent like toothless hicks at a McCain rally.


*The best sign I saw was of Jessica Simpson wearing a Cardinals jersey with the title ‘Yoko Romo’. Not sure why, but I laughed and it wasn’t just a courtesy laugh like when KK tries to make a joke, but a real genuine chuckle.


*The best jersey I saw was either the Quincy Carter jersey or the Bill Bates jersey. Lots of Pat Tillman jerseys were out there and surprisingly not a single Tim Hightower. If I was a Cardinals fan I think I’d rock a Larry Fitzgerald jersey. Or a Leinart jersey…he’s totally dreamy.


*The stadium is everything it’s cracked up to be. It’s spacious, it’s comfortable and no matter where you sit/stand you feel like you’re right on top of the action. Fantastic stadium all around. They didn’t have the roof open today, which was baffling because it was 85 degrees outside, but the multiple skylights helped us forget that the game was played indoors. If anyone ever attended a game at the Kingdome in Seattle let me just say it was nothing like this. The Kingdome was like playing a sporting event in a giant Costco. It was just weird.


Now back to my sports bet. The Cardinals returned the opening kickoff for a TD to go up 7-0. Perfect, 15 seconds into the game and there are 7 points on the board. I may make my over 52.5 before the first half ends. And then? Nothing. The score at the start of the 2nd half was 7-7. At the start of the 4th quarter it was 14-7. You read that correctly. 21 total points on a 52.5 point bet. Terrible.


And then there was a bit of magic in the dessert air. Points started to pile up. Patrick Crayton broke a long play for a TD. Marion Barber broke a long play for a TD. And holy shit it was 24-21 with seconds to play. Everything that happened after this point was flawless in achieving not only the greatest victory in the history of Cardinals football but the most impractible over in the history of my betting life. Let’s get straight to the point. When the game went into overtime at 24-24 the only chance I had of winning was if one of the teams scored a TD. And 4 plays later when the Cardinals blocked a punt AND returned it for a TD, I jumped up and down like the biggest dooshbag in all of Arizona. Wait, check that. I looked around. I may have been jumping up and down but there are so many d-bags in this dry, republican state that I was hardly the nerdiest of them all.


On a final note, Larry Fitzgerald is probably in the top 3 most talented football players I’ve ever seen in person. He caught balls that weren’t catchable in this universe. He willed his team to success on multiple different plays. This man is THE best receiver in the game. He has THE best hands in the game. Yes, I want to have Larry Fitzgerald’s baby.


I’m back in San Francisco on Wednesday.

Email ThisBlogThis!Share to TwitterShare to FacebookShare to Pinterest
Labels: do NOT write him back

I repeat: Do NOT write him back.

Oh wow. You guys are great. I read this a little too late though....

Sincerely,
Dirt Diver
PS-any buyers remorse on Obama yet or is your head still stuck up your culo?

The opposite of Republican isn't Socialist. It's pussy. But that doesn't make Republican a big swinging dick...It just makes Republican an asshole.