The Tale of Two Shitties 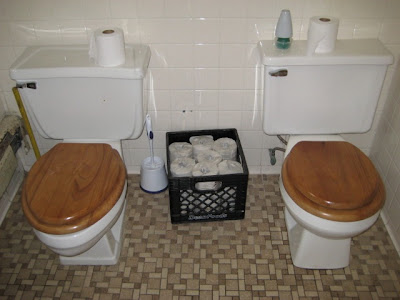 On one hand, his college team, a team coming off a season so putrid that its fans would dive face-first into piles of diarrhea just to avoid its stench, was suddenly showing promise, playing with pluck, heart and creativity for the first time in 7 years. Sure there were still traces and remnants of poop but it was dissipating, leaving only a splash, a pinch, an occasionally mild dusting of poopiness. In short, to be a Washington Huskies fan is analogous to coaching a teenaged-boy as he starts to discover women: sure he says awkward things sometimes like “I masturbated to your Facebook profile last night;” and every now and then you have to pull him aside and say things like, “no, no, you let her order first and then you take your dick out;” but damn it, that little knucklehead sure does make you proud when he does it right.


On the other, his pro team, the one true love of his sports life despite his daily resistance, was mired in the worst possible time: the year before the rebuilding year. After a period of sustained success, the most successful in their relatively brief history in fact, the players got old, bad luck crept in and the wheels started to fall off. In short, to be a Seattle Seahawks fan was kind of like being in a bad relationship that should’ve ended years ago but for some reason keeps plodding along and delaying the inevitable; inexplicably refusing to cripple under the weight of its own limitations. Then, on one particularly crestfallen night, you push all your chips into the middle and take her out for a fancy dinner, get really drunk, laugh genuinely at first, bitterly at the end, and wake up in a hazy stupor to the harsh reality that in your drunken state you accidentally went home with a transsexual florist named Toni. Does that make you gay? It might but who cares? You’d let the entire Cowboys’ offensive line run a train on you every day for the rest of your miserable goddamn fucking life if it meant you never had to watch Matt Hasselbeck play quarterback again, FUCK YOU, SEAHAWKS, FUCK YOU!!!


(Editor’s note: we apologize for the slight break in motif, we will now return to the bad Dickens impersonation)


Add it all up and what did it equal for our fair narrator? Unfortunately it meant that he could not enjoy the success of one while enduring the failure of another. These two completely separate entities had become unequivocally and inexorably linked in his mind, heart and balls. His was a rare and unforeseen torture, one team emerging from the funk and another about to enter in. Falling back in love while futilely trying to fall out. Like hearing a sexy voice and realizing it belonged to a girl who looks like Nick Nolte, or seeing a girl who looks like Megan Fox only to realize that she also talks like Megan Fox.


Sports. What an elaborate prank it all is. The lowest lows and the highest highs wrapped up in a facade of permanence and significance. Did this mean he would stop watching either team? Of course not. Loving your favorite teams isn’t like loving anything else; sports are the only thing in life you can complain about where the complaints are completely surface level, void of any subtext. There are only so many grenades someone can launch in the direction of their wife, partner, boss, co-workers, friends and family without the subconscious starting to reveal itself. Freud once said that “sometimes a cigar is just a cigar” and that’s true with sports. Sometimes you want to light that cigar and then shove it up your ass, but it’s a cigar nonetheless.


With that said, what did this little tale accomplish? Nothing. Do I feel better for writing it? No. Will I still drag myself to a bar to watch DeMacus Ware have sex with Matt Hasselbeck on live TV this weekend? Yes. Am I happy about this? No. Am I going to call Toni the transsexual and see if he wants to Jim Mora my Junior? Maybe. Has this whole situation, this weird, contradictory feeling made me love my teams or sports in general any less? No. If nothing else, it’s just a reminder that sports are one of the rare things in life that still has the capacity to surprise you on a yearly, if not hourly basis. And if you can’t realize and appreciate that simple fact then you’re probably a Seahawks fan. FUCK YOU, SEAHAWKS, FUCK YOU!!!

Please sir, I want some more.

That was well said, but god dammit the seahawks are all I have left. Fuck the mariners, fuck the seattle sounder bandwagon fans that don't even like soccer but like fondling balls, ya I'm looking at you not funny fat piece of shit grade D celebrity status drew carey. I want my motherfucking sonics back. Seattles reps lost the sonics as much as Howard Shultz is a douche, and Clay Bennet can suck it.

Check out sonicsgate if you ever loved them...