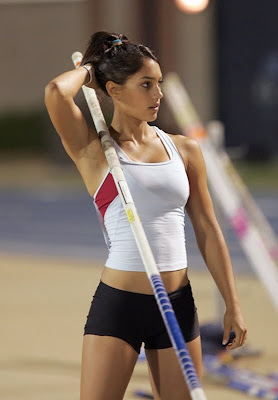 Apple
Shouldn’t we be celebrating the guy who secretly videotaped Erin Andrews nude rather than arrest him? He’s supplying a need to roughly 100 million other men with his fearless efforts. Some day this will be looked down upon as being as ridiculous as banning gay marriage, the iPhone only on AT&T and anyone who actually thought The Soloist starring Robert Downey Jr and Jamie Foxx was a good idea.


Moustache
I’m putting money on Favre tonight and giving the 5 points. Look, I hate that old fuck as much as the next guy, but he won’t lose this game. This is the equivalent of when Jon Gruden faced the Raiders in the Super Bowl as coach of Tampa Bay. There was no way Gruden would lose a game against his former team. I’ll tell you one thing though. If I have to watch Favre cry tears of joy one more time I might fist fuck a squirrel. Not sure the connection. But drastic measures would be called for. This is football for fuck’s sake. Why does he cry so much?


Apple
If you’re going to fart in a super market do it near the fancy cheeses.


Moustache
I’m so confused by this whole Starbucks Via thing. Let’s look at a hypothetical situation. Let’s say I’m a well hung, incredibly attractive, young professional who works a desk job. Everyday around 2pm I enjoy a cup of coffee. Now, prior to Starbucks dumping $100 million into an ad campaign to ensure I knew of Via’s existence, I would mosey on down the block, plunk down $1.75 and get a gigantic cup of pretty shitty Starbucks coffee. I would walk back with my green and white cup, silently announcing to my co-workers that I was in fact drinking a Starbucks coffee. Now? When 2pm rolls around I dig into my pocket to find a baggy of grains like a fucking crackhead, dump it into the mug with ladybugs on it, mix with hot water, and voila. It cost me less money. I don’t have to go into a Starbucks. Nobody knows I’m drinking a Starbucks. And most importantly it takes away one of the highlights of my day…leaving the office. I just don’t get it.


Apple
After reading through hundreds and hundreds of resumes, cover letters and introductory emails I have one word of advice for aspiring professionals applying for a job online. Be different. Seriously. If I have to read one more “I look forward to the opportunity” I might pull my hair out. Where’s the intro email that says simply “Let’s cut the crap. I’d tear this job up. Call me.” I’d hire that person on the spot. Ya heard?

Email ThisBlogThis!Share to TwitterShare to FacebookShare to Pinterest
Labels: how bout them Niners

i'd nail that pole vaulter in a heartbeat, fyi.

Where've you been? Thank goodness you're back. And right on with your Via analysis.

Who is that pole vaulter?