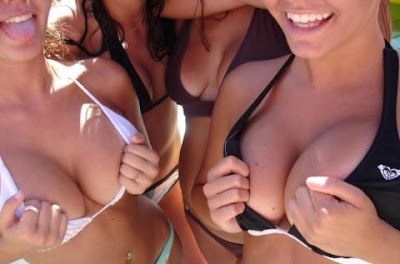 Shot down. That’s what happened. I wrote a whole post tonight. Not sure what it was about. Ok, I lied. I know exactly what it was about. It was gay. Totally gay. And luckily my wife read and it and told me it was gay. And not to post it. Because of its gayness. Note to self, don’t drink red wine, put on Elliot Smith and try to post. This blog is pretty linear in its direction. Not in its topics, cause with that we’re all over the place. But at least we’re consistent about our ridiculousness. We never stray too far off the path of ridiculousness. If I come along and get all Nancy Kerrigan and post some touchy feely bullshit then what does that do to our reputation? Smushes it. Knocks it around. Like Samantha Ronson when she gets to rub her face in those delicious looking funbags.

This much I know. Jericho is back tomorrow, thank God, it’s been lonely. The Giants and the Huskies can hold their head up high for a few more days. I watched most of the World Series of poker last night but turned it off during the final table just to prove a point. For the first time all season I’m feeling good about all of my fantasy teams but know very well that feeling will soon disappear. I have 11 people on Facebook who’ve asked me to be their friends and I knowingly haven’t acted on it. I love red vine licorice more than I love pancakes and waffles. Patch took the most impressive shit today, literally it was the size of a well fed third grader. I just found out about a few random people who read this blog and I couldn’t be happier. If Ryan Reynolds was any more attractive I might consider switching teams. My green Hurley hat is my new go-to hat in my collection. Keith Olberman’s video denouncing Prop 8 was moving…trust me, Google it. I still find myself wildly attracted to Sarah Palin, not her ideas, just her banging body. For fuck’s sake, I just used the word “wildly” in a sentence to describe my feelings like I was Charlotte Bronte. My new favorite response to something I find crazy is “for fuck’s sake.”

Email ThisBlogThis!Share to TwitterShare to FacebookShare to Pinterest
Labels: peyton hill or tatum bell whos it gonna be

It's even better if you put on a wee Irish lilt. "fer fook's sake". Of course, in a town full of irish drunks, you sort of blend right in when you say that.

totally made me laugh today, magglio. for fuck's sake, just get some balls and accept or ignore your 11 facebook friend requests!

If you post anything gay, we'll just start calling you Maggie for short.

OMG Mag's!!! You soooo are the biggest vagina out of all my gay friends.

I joke. You saved yourself slightly by talking about Patch's impressive loaf. Note: Feelings = dumb. Talking about big poop = cool.