Apples and Moustaches Entrepreneur of the Month Award

*Note: each month Apples and Moustaches showcases one of the brightest, bravest and boldest members of the entrepreneurial community. Nominations forms are submitted by a third party and A&M selects the winner based on a series of criteria ranging from ingenuity to marketability to the average breast size of the employees.

This month’s winner: Roydell Calico
Title: President and CEO
Company: SingSongSneeze
Headquarters: Pendleton, Oregon
Employees: 25
The Product: The Hanky Panky Handkerchief
What it does: A computerized handkerchief that masks the sound of a sneeze by playing music. Small computer chips in the handkerchief react to the air pressure and immediately begin playing a song when it’s sneezed into.
Company tagline: We turn “ha choo” into dee dee da da doo

Transcript of the interview:
A&M: First off, congratulations on this award. Have you given any thought to where you’ll hang the plaque?

(Disclaimer: A&M does not supply actual plaques, but contest winners and really anyone for that matter are free to create a plaque that says anything they want. For suggestions on plaques please go to your local plaque store.)

RC: Thanks. We really appreciate the exposure. I’m afraid to get a plaque to be honest, I’m afraid my ex-wife will steal it! She’s taken everything else. She even took the plaque I won in my ninth grade diving meet. In fact, that bitch should have a plaque to commemorate all of the plaques she’s stolen. Congratulations, honey.

A&M: Yes, well, I’m actually glad you brought up your ex-wife; it’s my understanding that she was the inspiration for The Hanky Panky Handkerchief, is that correct?

RC: She’s been the inspiration for a lot of things. Most recently she inspired the entire Dallas Cowboys offensive line to get tested for HIV.

A&M: Right. But The Hanky Panky Handkerchief was originally created becasue of your then wife’s allergies, correct?

RC: That’s true. She has the longest list of allergies I’ve ever seen. Dust, cats, snow, nuts, bananas, laughing, happiness, honesty. About the only thing she’s not allergic to is strange dick in her mouth. 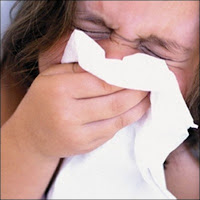 The Hanky Panky in action. Without sound of course becasue it's a picture.

A&M: So she’s allergic to most everything, she’s sneezing a hundred times a day, you’re an engineer, walk us through the birth of The Hanky Panky Handkerchief. How did you get started? What was your light bulb moment?

RC: Well, I’ve never really cared for the sound of someone sneezing. Sometimes it can be funny, if you’re in a really quiet room and someone sneezes really, really loud, like a cannon going off. I like that. Or when someone does a really huge physical buildup, shoulders back, face scrunched and you’re expecting a cannon but instead it’s quick and high pitched like a mouse fart. That’s good too. But for the most part, sneezes are pretty obnoxious. And my ex-wife, her sneeze is one of the more annoying sounds on earth.

A&M: How would you describe it?

RC: Imagine slamming your testicles in a car door. Now take that pain and put it in sound form and that’s what it’s like.

A&M: Interesting. So her sneeze actually causes you physical pain?

RC: Well the pain from her sneeze is nothing compared to the pain from the rash she let me borrow. But yes, it's annoying and painful. Imagine coming home for Thanksgiving and seeing the seven dwarfs tag teaming your mother, that’s what her sneeze sounds like.

A&M: I imagine in that scenario Sneezy would be doing the most damage, right?

A&M: Sorry, bad attempt at topical humor. So you’re married to a woman with a horrible sneeze, you want to cover that up, why a handkerchief? Aren’t handkerchiefs only used by Anthony Hopkins in Merchant Ivory movies?

RC: Well that was part of the allure. Not only could I cover up her horrible sneeze but her whorish face as well.

A&M: Can’t argue with that. What about the songs? There seems to be a pattern running through some of the songs you chose, “Cry Me a River,” “Your Cheatin’ Heart,” “Lyin’ Eyes,” “You Ain’t Woman Enough,” Jolene.”

RC: Well, I’m one of those people who think patterns run through everything. For example whenever my wife would “go shopping with her friends” that really meant she was bouncing some guy’s nuts on her nose like a seal at the aquarium. And when she “was going to the gym to work out” that really meant she was going to get worked out by a guy named Jim. Or when she was going to get a “facial,” well, that was actually kind of true I guess. Maybe I think patterns run through everything because my wife has been run through by everyone.

A&M: Well, Roydell, this has been very enlightening. In closing, any advice to young entrepreneurs like yourself? How would you advise a young inventor to take his idea from innovation to profit?

RC: I think you have to start with a dream and have the conviction to never waver from that dream. Then you have to have an idea and never let any other ideas get in the way of the idea. But more importantly, and in the words of someone much smarter than myself, “don’t ever try to make a ho a housewife.” Not only is it expensive, draining and dangerous but my dick can now speak Spanish.

A&M: Roydell Calico, thanks for your time and congratulations on being Apples and Moustaches’ Entrepreneur of the Month.