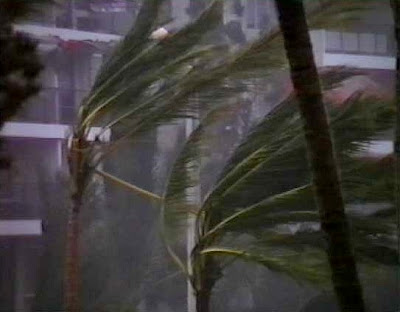 Why do they give massive hurricanes names? I mean, I understand that there is a need to categorize these for tracking purposes but why proper names? Without being too insensitive, I'm having a hard time reading articles today about Hurricane Dean without thinking about Jericho’s dad…also named Dean.

I just read an article on CNN.com that had the headline;

I’m not kidding. That’s really what it said. Immediately I had a mental image of Jericho’s dad, red faced and perspiring, charging across and bulldozing anybody in his path. It’s a lot funnier if you actually know Jericho’s dad. But that’s my point. Everyone knows a Dean or a Bob or an Andre.

I remember when I was in 5th grade and Hurricane Hugo went rip shit in . It was devastating. But of course, the foreign kid at school was also named Hugo. The one-liners were legendary, even for a bunch of 11-year-olds. Hugo (the foreign kid) would take off running across the yard at recess. “Heads up! There goes Hurricane Hugo!” Or if he got angry…”Careful, Hugo might turn from a Tropical Storm to a class five!” Ah, 5th grade.

Maybe it’s to keep things lighthearted. “Oh, that’s just cute and cuddly Emily. Isn’t she precious…” We don’t name earthquakes or tornados do we? Whose genius idea was it to name hurricanes? I don’t think there has ever been a Hurricane Magglio. But damn it if my fingers aren’t crossed.

I'll tell you why they give Hurricanes names. Have you ever seen my dad mow the lawn in jeans and no shirt? A lot of things start to make sense once you've seen that.