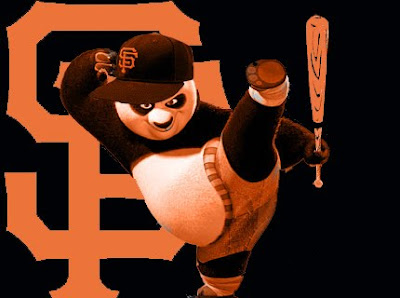 A couple nights ago I was enjoying a 100% locally raised and sustainably farmed pork chop with the wife, when suddenly she put down her fork and knife and leaned in close to me. She grabbed my hands, looked into my eyes, and said...“I just want you to know how much you mean to me, Magglio. I love you so much.”

“I love you too baby,” I said in between bites. “And I have to tell you something. (dramatic pause) I really love the Giants.”

And with that, she let go of my hands in disgust and returned to her dinner. I too returned to my savory slab of deliciousness and let my mind wander. About Timmy winning back-to-back Cy Youngs, about Cain getting 18 wins, about Panda being 2nd in the NL in batting, about the idea of Zito thriving with the heat of a Wild Card race in play. This team is something special, and to quote the spot-on marketing campaign they just released…we’re in this.

Today is a day game. First pitch is at 12:45 best coast time. I love day games during the week. It means I get to listen in my office on my $4.99 AM radio I pick up at Walgreens. No matter what the work day throws me today I know I’ve got Giants baseball for at least a few hours.

So I thought I’d try something new today. I’m going to do a running diary of my day and of the game. Timmy is on the mound which means I’ll be at half-mast the entire time. What could be better?

12:11pm – Ok, first pitch isn’t for another 34 minutes but mentally I’m right where I need to be. We’ve dropped 2 in a row to the Dodgers and stand 1 game back of Colorado in the Wild Card race. Calling today’s game a must-win is like saying you’re annoyed with the whole Jon & Kate tabloid stories. No shit asshole.


12:20pm – People in my office are Giants fans, but nothing like Judy. Judy is the kind of die-hard you see at games, sitting alone, with their hat covered in collectible pins, rubbing orange and black rabbit foots for good luck. Yes, this is Judy. Her office is covered in framed photos of old Giants players, tattered pennants and framed photo of her Dalmatian wearing pearls and holding a parasol. No idea what the Dalmatian photo has to do with anything, but it’s worth noting. I just stopped by her office and we exchanged knowing glances. “Let’s win today,” I said. She nodded a nod that was all business. Good. We’re exactly where we need to be.

12:27pm – Just got an IM from Jericho telling me he’s in meetings until 3. What the fuck? Doesn’t anyone realize what’s at stake today? Honestly not having Jericho online during a Giants day game of this magnitude is like being T.O. and not having Mo and Kita on my side. How am I supposed to function?


12:32pm – I just checked my calendar again. Shit. I have a 2pm scheduled. Ain’t that a bitch. Stay focused. Don’t let these distractions get to you. Giants baseball. Say it with me, Giants Baseball!


12:47pm – First batter strikes out. Lincecum has 199 strikeouts so far this season. The next closest guy in all of baseball has 186. This kid is electric. Three up, three down. And Jon Miller said the word ‘glorious’ 3 times to describe the weather.


12:52pm – We’re facing one of the Weaver brothers. Not sure which one. Does it really matter? It’s like which Jonas brother would you rather get in a headlock and give a noogie to in front of MIley Cyrus. Doesn’t matter right? It would be totally LOL.


12:57pm – As I sit on the edge of my seat listening to the radio I realize 2 things. 1) I’m at work, which means emails etc are piling up while I type this silly post. And 2) I gotta find a job where I can do nothing but write for A&M all day long.


1:03pm – Timmy vs. Manny. Talk about poetry. Good vs. Evil. All that is right in baseball vs. all that is….shit. Walked him on 5 pitches. Not to worry. Manny is taking woman’s hormones. He’s not causing any problems for us with his dumpy ass on first.


1:08pm – Double play. See, I told you that big haired bitch wasn’t doing anything on first.


1:12pm – The best player nobody has ever heard of outside of SF; Nate Shierholtz. His first swing after 15 days on the DL was crushed 421 feet into the gap for a triple. This guy is the real deal. Plus you should see his jaw line. If Heath Ledger and Joseph Gordon-Levitt’s jaws had a baby jaw it would be Nate Shierholtz’s jaw. That made a lot more sense in my head.


1:22pm – We lead off the 2nd inning with a triple. Then load the bases with no outs. And we walk away with exactly 0 runs. Giants baseball. Say it with me, Giants baseball.


1:44pm – They just said it’s a sold out, standing room only, crowd. That I’m convinced is the draw of Tim Lincecum against the Dodgers. Still 0-0. Debating if I should get coffee before the 2pm meeting. Still pissed I’m going to miss a large chunk of this game. Hopefully it’s rain delayed. Not likely.


2:58pm- Can’t wait for the radio to tell me, I have to go to ESPN Gamecast. YES! 2-1 Giants in the bottom of the 7th. First the good news; Freddy Sanchez (our prized 2nd basemen we traded for) hit in 1 of the runs. Now the bad news; I missed the 7th inning stretch. I always like to sing ‘Take me out to the ballgame’ at the top of my lungs in my office. I can always get Judy to join in. She tears up when we get to the ‘if they don’t win it’s a shame!’


3:09pm- Ah shit. Timmy is coming out for the 8th. Reason #122 why Lincecum is the best pitcher in the game, he gets better as the game goes on. No really. I’m willing to bet this next inning is a 1,2,3 and will include a fast ball in the mid to upper 90s. (side note: If I just said that sentence aloud to my brother right now, predicting what may happen, he’d throw the biggest hissy fit you’ve ever seen. I’m tempted to call him, predict the 8th inning, and listen to him trip out. Man I love that kid.)


3:10pm – Boom. Like clockwork. First batter goes down swinging. No word on the speed but who gives a fuck. This is Timmy’s ballgame. Just sit back and watch/listen/read.


3:11pm - Another strikeout. 2 outs. If I ever met Lincecum I'd nervously shake his hand and say something like 'I went to Washington too. Go Dawgs!' And yes, I'm 6 years older than he is.


3:15pm – And he strikes out the side!!! (note the 3 exclamation points.) They should rename the Golden Gate Bridge the Tim Lincecum Drive Over Thing, um, or the Sweet Timmy Bridge. Um, shut up, why are you still reading this? Just jump up and down and make noise! Timmy struck out all 3 batters! We’re going to the bottom of the 8th. Giants still lead 2-1!

3:24pm – We put a couple guys on but couldn’t score. We’re like the 9th graders of MLB. We touch a lot of tits but never get to pet the turkey. (Honestly, I just offended myself.) We’re going to the 9th inning with Timmy set to close it out and a slim 2-1 lead.


3:25pm- Commercial break. I’m going to go check on Judy. 3:27pm – Judy was ecstatic. Couldn’t speak. Shaking almost. She asked me “do you think he’s one of the best pitchers ever?” I said yes. And I meant it.


3:30pm – Mother fucker. Why am I at work? People keep talking to me. Through some nonsense chatter I heard that Furcal reached on an infield single. Fielder’s choice got him to 2nd.


3:34pm – Ander Either and Lincecum are in an epic battle. The count is worked to 2-2. You can feel the intensity. Palpable I’d say. Yes, palpable. As Roger Dorn once said ‘Strike this motherfucker OUT!’


3:35:25pm - I could hear the groan from Judy across the hall at the same time the ball trickled through the infield. Tie game. Mother fucker.

3:40pm – Wilson has worked Manny to a full count. The crowd sounds deflated. I feel deflated. Somewhere a child pulls the wing off a butterfly.


3:41pm – Strike 3! Don’t let the exclamation point fool you. I’m not pleased. That stings man. Fucking stings. Remember how this post was going to be epic? Now it's just sorta cool? Sucks. I’m afraid to check on Judy.


3:42pm – BOOM! Pablo Pandoval crushes one to deep center. He though he ended the game so the chubby little bastard went into his home run trot. No dice. Hit the wall. Double. Not a problem. I love that fat fuck.


3:43pm – Judy is out of her chair pacing in her office. Pumping her fist. How can anyone not like baseball?


3:47pm – Sheirholtz is being pulled for Ryan Garko? What the fuck? Garko is 2 for 36 since coming over to San Francisco. Wait, no, Aaron Rowand is going to pinch hit. Can’t argue against a guy who has a World Series ring. But dude, remember Shierholtz’s strong jawline?

3:49pm – A dribbler to third. Double play. Inning over. We’re going top 10. Man I hate baseball.
4:02pm – Dodgers get a guy on but Wilson shuts them down. I also made myself a snack. Almonds, a plum, and some baby carrots. Yes. Real gay. We’re going to the bottom of the 10th.

4:07pm – We start the inning with a 4 pitch walk. Randy Winn is up. I’m now wondering if anyone is reading this as I post it and more importantly if this thing goes into way extra innings will this be the longest/best/worst post ever?

4:08pm – I just got off the phone with a guy who wanted to know if we’re interested in purchasing a booth at the Honey Hole Trade Convention in St. Louis this September. That’s the not the name of it I just stopped listening to what he was saying cause we’re in the fucking 10th inning. Priorities people!


4:09pm – I have a meeting that was supposed to start at 4pm. My boss is nowhere to be found. I take this as Karma, and a good sign.


4:14pm – “Boom I got your boyfriend, I got your man.” Remember that song? Doesn’t matter. That’s what was playing in my head as I did my victory gyrations against my desk. Uribe just put one in the bleachers. Ballgame over. 4-2 Giants win!!!!


4:15pm - I just did the obligatory, “now I’m flipping the desk over and hitting it from behind” movement. Yeah, I went there. Judy is doing some sort of chicken dance with what looks like the running man mixed in. I love it. It works. Go crazy. Break things. Classic stuff. I’m beat. Giants baseball.

Say it with me now….Giants baseball.

umpires were lousy this whole series, 1st base in particular was bad. i went to the game on Monday and i heard Bill Hohn whisper to Travis, "I own your momma's pussy." Gary Darling tried to ruin today's game, definitely cost Timmy the win.