The Franchise on Showtime 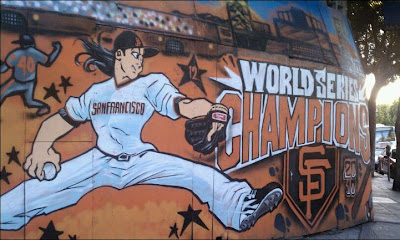 
We get accused of being homers on this site a lot. And it’s a totally fair accusation. We love our teams. We love the west coast above and beyond all else. It’s just the way we do things. That being said, you can appreciate it when I say that the Showtime series premiere of ‘The Franchise: A season with the SF Giants’ was a complete failure.

Where to begin? The bar has been set so high for reality sports shows. HBO has been doing the Hard Knocks series on and off for the past 10 years. And recently they’ve excelled in the 24/7 series. HBO does this better than anyone. They create meaningful stories and insightful glimpses into a world the audience knows little about. They could cover a competitive gardening league and it would be better than what I saw last night. So needless to say when Showtime announced it had partnered with the Giants for an “all access look” throughout the season I was instantly turned on. To put it in perspective I signed up for Showtime the moment I heard about the show. That was 3 months ago and I haven’t watched anything on Showtime yet. Until last night.

Man, what a train wreck. Admittedly, they bit off more than they could chew by trying to recap the first 80 games of the season in a 60 minute time frame. But the problem is hardly any of the footage felt new or different. There were countless ‘interviews’ with players with standard cliché quotes that went nowhere. Great opportunities were missed. Every home series the Giants top brass (Bochy, Sabean, Baer and Neukom) get together to assess the current state of the team. They showed this meeting a handful of times and NOTHING important was said. I mean they all sat there like semi-interested fans wondering when the guy with the lemonades was coming around again.

How could Showtime mess this up so badly? And when the show did try to dig deeper it missed badly. Cameras followed Jeremy Affeldt driving home. Packing for a road trip. Eating a ham and cheese. It was painful. And so disappointing. The show missed another huge opportunity with Buster Posey. The parts about him were basically him sitting on a couch with a big cast on his leg talking about how it’s hard to not be out there and playing with the guys. There was no depth. No storylines. No nothing.

HBO reality sports shows have exceled because the viewer walks away feeling like they learned something; either about the team, about the players, about the sport…hell even about themselves. But nothing came of last night’s show.

The highlight was of course Brian Wilson. They easily could make this entire show about Brian Wilson. Well, that and Matt Cain’s fat baby. But nothing else sticks. Show us Panda in the dugout. Show us the players working out. Show us the weird rituals they do before games. Show us that swagger that makes them a first place team despite having the worst batting average in all of MLB.

The Giants are the most charismatic cast of characters to ever assemble on any sports team in the history of ever. And somehow Showtime made it come out tasting like tapioca pudding.